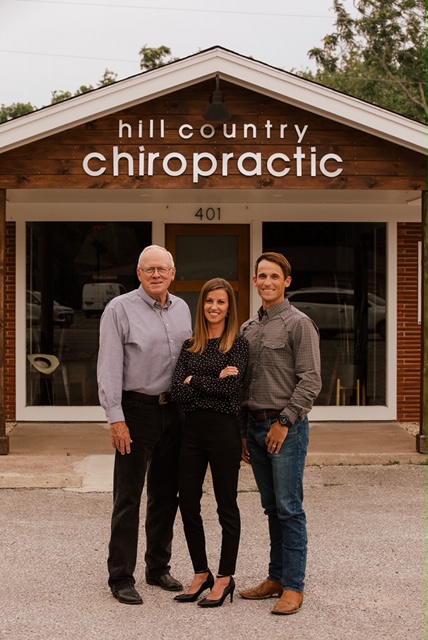 Dr.'s Zach and Corinne Sumrall are licensed Chiropractors and have been serving the Kerrville community since 2008. They are committed to promoting optimal health and well being of their patients.

Dr.'s Sumrall use a "whole person approach". This approach to wellness means looking for underlying causes of any disturbance or disruption (which may or may not be causing symptoms at the time) and make whatever interventions and lifestyle adjustments that would optimize the conditions for normal function. Using this unique approach, Dr.'s Sumrall are able to help you to accelerate and/or maintain your journey to good health.

Dr. Zach Sumrall is a native Texan who grew up in Willis, TX. After receiving his bachelors of science degree in Biomedical Science at Texas A&M University in College Station, Dr. Zach moved to Dallas to pursue his doctorate of chiropractic. Upon receiving his degree, Dr. Sumrall worked in Dallas as an associate doctor for two separate clinics. Approximately one year later Dr. Zach and his wife, Dr. Corinne, moved to Kerrville to pursue their own private practice, what is now Hill Country Chiropractic & Wellness Center. When not in the office, Dr. Zach enjoys spending time with his family, coaching our children's sports, hunting, fishing, exercising, digging for Indian artifacts and carpentry.

Dr. Henry Hubble is a Texas born native who grew up and graduated from Medina, Texas High School being active in sports, FFA, and 4-Hand Rodeo. Two years later he graduated from Southwest Texas Junior College in 1969 and transferred to Sul Ross State University graduating with a BS dregree in 1973. That same year he married his wife of 50 years, Chula. They taught in a west Texas high school and coached various sports for three years where he was the team trainer and weight coach as well. Along the way three children were born to them and the next generation blessed them with six grandchildren.  After three years of teaching and coaching they moved to Davenport, IA to pursue his dream of becoming a Doctor of Chiropractic. He graduated Cum Laude in 1979. While he attended chiropractic school he was the assistant instructor of chiropractic adjusting techniques and clinic student overseer for incoming interns. He worked with a chiropractic doctor in Oklahoma prior to coming to Kerrville in 1980 where he was in solo practice for 37 years. During those years various post-graduate courses where studied to keep up and improve the practice. He retired from full time in 2017 selling his records to Drs. Zach and Cori Sumrall who later invited him to work for them part time in their clinic. He has practiced here part time since, enjoying the clinic atmosphere and great attitude of the staff.

Past President of Kerrville Lions Club

Find us on the map